Pneumatic injection pump uses compressed air as the power source,cylinder has a larger ratio of work area, so that a smaller pressure cylinder can produce high injection pressure. 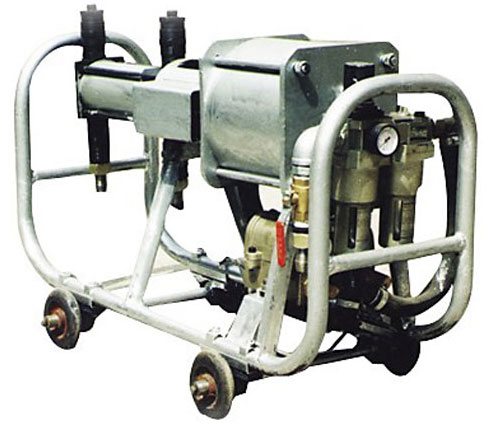 The Model And Meaning Of Product Exit and entrance of pumps are used push-in connector

Pictures For Reference Only Due To Different Product Batch & Specise. Please Contact Our Sales to Confirm.

Compressed air through the ball valve to gas filter, purified gas to pressure regulator, with a barometer between this, you can observe the intake pressure and determine whether the filter bowl of gas filter is blocked, can also determine if the work of pressure regulator is normal, the barometer indicates the gas pressure of output, the dial on cylinder rod dial travel valve, by the travel valve control directional valve, changing the direction of the gas, the cylinder piston to promote reciprocating motion, the cylinder exhaust emissions through the muffler to the atmosphere. Cylinder piston rod directly to promote the cylinder piston, through the into the plasma valve to complete the suction slurry work, the slurry through the mixer and grouting nozzle, was pressed into the borehole wall, diffuse into the cracks in the rock.

The Pressure regulator have the advantages of automatically adjusts the gas flow while keeping the output gas pressure constant, which constitutes the pump closed-loop automatic control, so that the discharge has the performance constant pressure automatic adjustment.

In the early stage of grouting, due to the large rock fracture and the small diffusion resistance of the slurry, the pump pressure is low. At this moment, the piston resistance of the cylinder is small and the pressure of the working gas is low. The regulating valve needs to maintain the pressure of its output gas and automatically increases the output gas flow, Therefore, the reciprocating pump speed up, displacement will be large. (When the slurry consumption more than the maximum displacement of the pump, the indicates pressure of grouting is lower than the set pressure).

Late grouting, rock fissures gradually filled, the diffusion resistance of the slurry increases, the pump pressure increased, at this time the exercise resistance of the cylinder piston and working gas pressure are increased. Pressure regulating valve will automatically reduce the output gas flow to maintain the output of gas pressure does not exceed the set value, so that the pump speed slowed down, reducing displacement. At this time, ample time of slurry diffusion to maintain the same grouting pressure, to protect the safety of construction. When the rock fissure is filled with slurry, the grouting volume reache zero, the pump can still maintain the final pressure unchanged. Therefore the density of grouting filling is good. The automatic adjustment performance of the pump is more timely and accurate than others, so the grouting time can be shortened, the grouting quality can be guaranteed, the grouting material can be saved, and the safe construction can be guaranteed.